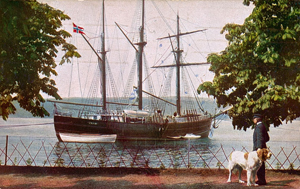 Fram ("Forward") was a ship used in expeditions in the Arctic and Antarctic regions by the Norwegian explorers Fridtjof Nansen, Otto Sverdrup, Oscar Wisting, and Roald Amundsen between 1893 and 1912. Fram was probably the strongest wooden ship ever built. It was designed by the Norwegian shipwright Colin Archer for Fridtjof Nansen's 1893 Arctic expedition in which Fram was supposed to freeze into the Arctic ice sheet and float with it over the North Pole.

Fram is said to be the wooden ship to have sailed farthest north and farthest south. Fram is currently preserved in whole at the Fram Museum in Oslo, Norway.

Nansen's ambition was to explore the Arctic farther north than anyone else. To do that, he would have to deal with a problem that many sailing in the polar ocean had encountered before him: the freezing ice would press and crush a ship. Nansen's idea was to build a ship that could survive the pressure, not by pure strength, but because it would be in a shape designed to let the ice push the ship up, so it would "float" on top of the ice.

Nansen commissioned the shipwright Colin Archer from Larvik to construct a vessel with these characteristics. Fram was built with an outer layer of greenheart wood to withstand the ice and almost without a keel to handle the shallow waters Nansen expected to encounter. The rudder and propeller were designed to be retracted into the ship. The ship was also carefully insulated to allow the crew to live onboard for up to five years.